Explaining Depression to my Children 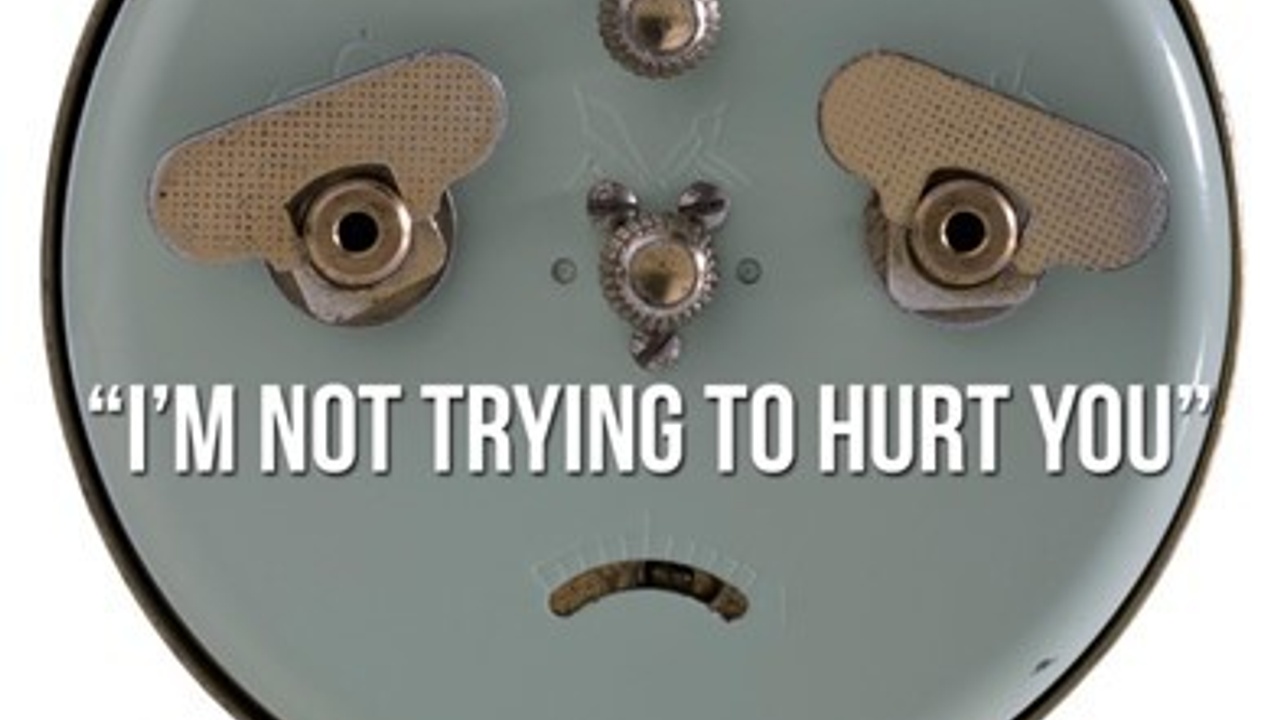 I’ve been a mother throughout my unwanted yet unavoidable episodes of depressive illness. I’ve been ill with clinical depression on three occasions over the past 5 years, and one of my biggest challenges at the time of being unwell, was to protect my children throughout this period.

Depression is bleak. The things that usually give us joy turn bleak. It’s difficult to find pleasure in anything. It’s hard to physically function. We can experience physical symptoms such as no appetite, disturbed sleep, physical aches and pains.

It’s isolating – you can be in a room full of people and feel very alone. It’s like being in a glass box whilst the world carries on around you. In these days of depression, the colour of life fades and everything is in monotone – the flowers, the trees, the beach. Reading a book is impossible. Music brings no joy. 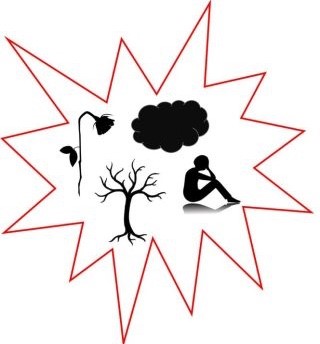 The first time I was ill, I didn’t tell the kids anything. They were just young children, aged 6 and 3, and at this time there’s no way I could tell them what was going on with me. I didn’t really know what was going on myself or why I was unwell. For their part, I functioned just as I usually do. But I was ill, so to function at this level took an extraordinarily amount of strength and looking back I don’t know how I did it!

My daughter was in Year 2, my son had just started nursery at the same school.  As I had been signed off work, I took the kids to school and picked them up each day. Every single pick up at 3.30pm was a painful experience – every single one! I remember standing in the playground, looking around at other parents, chatting away to their friends, smiling, laughing, and thinking ‘why can’t I feel like they do – I’ll don’t think I’ll ever feel like that again’.

I continued to take my kids to their friends birthday parties, I continued to take them to the park – full of anxiety and dread each time. Myself and my Mum even took them to Butlins in Skegness at the February half term! A time that should have been joyful was difficult and painful for me.

My good health returned shortly after that February half term. And I felt that connection again to life, and my children, and it was the best feeling ever, just to feel normal again! So my children never knew that I was ill, and I felt delighted that I had managed to get them through this period unscathed.

The second time I was ill, my kids were abit older, aged 8 and 5 My painful symptoms of depression included cognitive problems, and poor concentration and memory. It started in September and continued through October and November. I was able to carry on as normal with the children; it didn’t seem as difficult as the first time around, but it was difficult nonetheless. I remember thinking that the days were very long.

Come December my health rapidly declined, almost overnight, where things got a lot worse for me and I got to the point where I couldn’t function – I couldn’t even work out how to put fish fingers and chips in the oven! Within a week I had zero appetite, and couldn’t stop crying and wailing in front of the kids. So I knew that I had to tell them something, but again how could I explain depression to them? So I told them that I had an inner ear problem which created pain, and although they couldn’t see it, that the tears were because of the pain.

At this time I felt comfortable with giving the kids ‘a reason’ why I was ill, even if it was a white lie! In January I had some therapy sessions, where I worked with a psychologist using CBT therapy. I remember telling her what I had told the kids. She told me it would be better if I was honest with the kids that I was ill with depression, and like most illnesses, I would recover. I wasn’t comfortable with that for two reasons.

1:  I still felt they were too young to understand the implications of mental health illness
2:  I didn’t think that I would recover. Even though I had already recovered once, this had been going on for months and I was losing hope.

This was my longest episode of clinical depression, it lasted for 6 months, but I did get better again in March. Joy returned to my life. This is the time where I vowed to learn more about the illness, and what had caused it. As Ruby Wax describes it ‘opening up the car bonnet and learning about all the parts’ so I strived to learn about what was going on with my brain, and the causes for the malfunction in the first place.

In short, for me it all lead to one thing – burnout! At the time I had a challenging job as Events Manager, and I was a Mum to two still quite young children. My goal posts had changed. I tried to do it all as well as I could.  I did too much for too long, and I burnt out my stores of the hormone chemicals needed to function as normal. You can not put 15amps of energy through a 5amp fuse – the fuse will blow!

The third time I was ill, my children were aged 9 and 6. I became unwell in April and I declined straight into a severe episode of depression. Although I had stopped working at this stage for a career break after learning more about how I had become unwell, I remained as busy as ever with lots of volunteering and a very active mind of things that I could do! And I could only see this, when the depression hit!

The words of the therapist came back to me ‘it would be better if I told the kids that I was ill with depression, and like with most illnesses, I would recover.’ I knew that this was the time I had to tell them something about the illness. A few months previously I had an ear infection, and I when I told the kids this, the horror on their face said it all! I didn’t want them to be horrified every time I had an ear infection! So I knew that this time around I had to tell them something about this illness. Something they could understand.

I chose to do this by explaining the symptoms that were physical for the children to see. Top of the list was the tears! But also, other things like my concentration; they would be telling me something, and I couldn’t take it in! So rather than them jumping to the conclusion that ‘I didn’t care’ as I couldn’t compute what they had to say, I knew I had to tell them that the reason for this was because of an illness I had, an illness that they couldn’t see.

I called the illness ‘Mummy’s Fractured Limbic System’ and explained that it was most commonly known as Depression. But before I sat down with them, I produced a one-page document to help me. 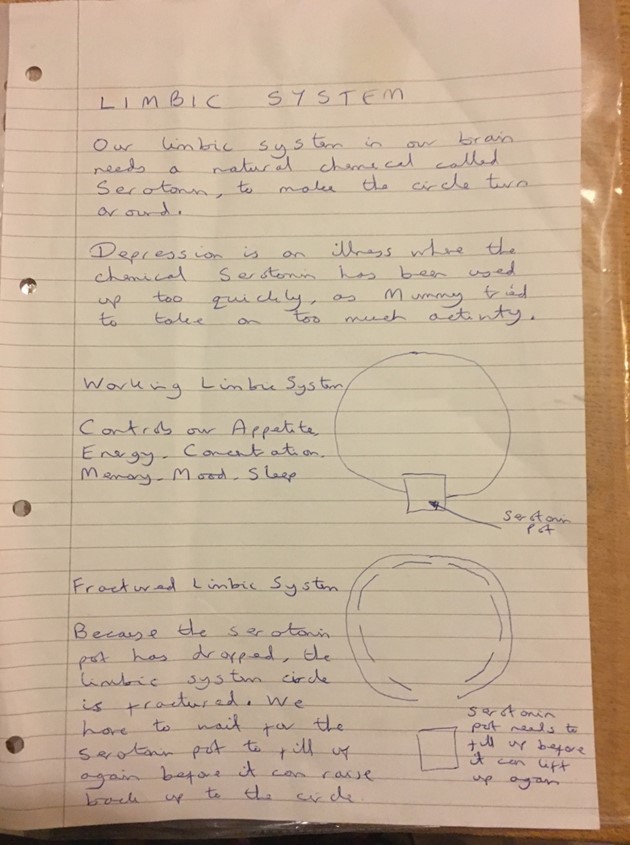 I was able to talk through the document, and to show them that by having a fractured limbic system, it created problems for me with my appetite, energy, concentration, mood and sleep.

When the kids saw that I struggled to eat my dinner, and I did try to eat each day, they would know that I had no appetite because of my fractured limbic system – I wasn’t getting the message that I needed to eat! And of course, this is true, no white lies needed.

I would explain that the fractured limbic system was like a fractured bone. That it would mend, and I was taking medication, but just like a broken bone it would take a while to mend. When the kids saw me crying  I would tell them it was part of the illness and that they didn’t need to worry. There were lots of afternoon when I sat there crying, the kids would say ‘are you ok Mummy’ and I would say ‘yes I’m ok, the tears of just part of the fractured limbic system – it’s not regulating my tears properly and that is why they fall when they’re not meant to’ and then the kids would go back to whatever they were doing.

I accepted alot more practical help this time from friends. Friends would help by taking the kids to school and bring them home,. Other friends helped get the kids to activities outside of school, and would arrange playdates for my children. I felt guilty and frustrated at not being able to do these things myself, but I felt better knowing that at least the kids lives were still going on as usual. 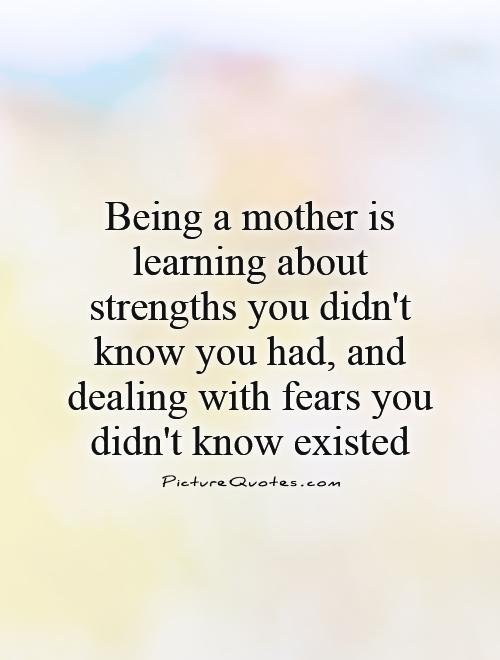 The one page LIMBIC SYSTEM document sat on our kitchen table for three months, and was used on most days for when I needed to describe any of my symptoms.

On one occasion I remember my daughter saying ‘Mum, this has been going on a long time, are you sure that you will get better?’ and I was able too answer Yes with certainty, because the previous two episodes of depression had taught me something valuable -  knew this time I would come through the illness, it was just a matter of when!  It didn’t make my days any easier, but knowing I was protecting the kids at this time did bring me comfort.

Every time they asked a question, I knew that I had done the right thing by telling them an abridged version of the illness, because they clearly felt comfortable enough to ask me these questions and to let me know that they were worried, rather than keeping it in which I believe would have been more damaging.

So I thank that therapist for her advice. My children now had a reason why Mummy ‘wasn’t herself’ and they felt comfortable enough to voice their concerns when they had them.

When my good health returned late June, on My Mum’s 60th Birthday, I felt elated joy! And I was able to say to my children ‘See, I told you Mummy would be better when my fractured limbic system healed’ and I still cherish these words to this day, and probably forever.